A year-and-a-half ago I set out to create my very first photo book. And now it finally arrived! I thought I would never finish the book, except that I kept being reminded that I should finish what I start.

I had some free time one evening this week to do anything I wanted. So I told my wife I wanted to finish “that book I started when we were living up in the north of Sweden.” So I grabbed something to drink, sat my butt down on our living room sofa and worked out the kinks that were left in the book I had already started, and within a couple of hours, it was uploaded to Blurb’s bookstore.

Buy Waiting for Spring | Make Your Own Book

The book was written in response to a Facebook message I received after God prompted me to post a photo to encourage anybody who might be struggling through a difficult situation. I decided that if only one person was encouraged, then I would be happy. Sure enough, only one person responded! But the whole thing seemed so orchestrated by God, because this person needed a timely encouragement.

The following Sunday, I had a  chance to weave the person’s story into my sermon that I was preaching at a local church service. And then, again, at Veronica’s home church later that week. Both events brought the most profound reaction by the congregations, and they were noticeably inspired by my little story.

That’s just part of the story about my first book titled “Waiting For Spring“.

I encourage you to buy my book, because I’m selling it at a very low mark-up from Blurb’s base price. I’m doing it this way because 1. I want the book to be available to encourage as many people as possible, and 2. Since it’s my first book, I don’t think I’m in the position to charge an outrageous price.. at least not yet anyway! heehee!

I plan to make many more books in the future, and I hope you’ll buy every single one of them 🙂

Today, I heard an inspiring photographer say “Shoot what you like to shoot. Don’t just copy someone else’s style.” His point was that if you build a porfolio of work that you enjoyed making, there will be an audience that also likes it, and they’ll hire you to create something for them too. but, if you always do what others want you to do, or try to copy someone else, you might not enjoy what you do.

So, here’s my first attempt at having fun with the camera – not that I’ve never had fun before! But I mean with this new perspective. It’s one of those FX pictures, where the hand looks incredibly ginormous because of the way I placed it in the frame in front of the gym hall. Pretty nifty, huh? My brother and I tried this once when we were kids, in our parents’ back yard. So much fun!

I think I like this new way of shooting. Maybe I’ll make lots of bucks selling pictures of giant gymhall hamburgers. Or, maybe, just maybe I’ll develop unique a style out of it and become the next Ansel Adams. 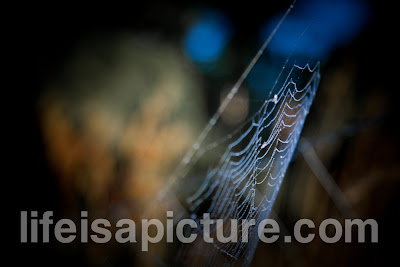 I’m really into spiderwebs these days. I’ve been going out early in the mornings to take photographs, and I find these incredible spiderwebs that, at any other time of day, are hidden by the unaware eye.

But when the early morning dew hits them they just shout at you! I love taking photos of them, because, when I get back to my computer and upload them I get to show Ramus, who is really into Spiderman these days, er I mean months.

It’s also quite amazing how the spider builds his house on ‘sand’; one good blast of wind and that plant or fence post that the web is attached to comes crashing down, taking the spider’s home with it. Yet, that is the best place for a spider to catch its meal. It’s basically a supermarket on a stick!

Utflykt means ‘outing’ in Swedish. Like, when you go for a hike and bring along some snacks and coffee. So Veronica, and the boys, and I did that with her Pappa. Ramsus and I rode our bicycls, on the big road! Wow! Then we headed over the bridge to Restenäs Island where we had fika, watched the boys play in the small playground, tried to feed melon rinds to the sheep across the fence and hunted for blackberries. We didn’t find but a small handful of blackberries, but we found a whole heap of quality time together. It makes a huge difference when we take time out for family, or relationships or even just some time alone to clear our thoughts and connect with God.

Every time I drive into town to buy groceries, or benzine, or paint supplies, I pass this amazing little boathouse in Ulvesund. And just about every time I pass it, I glance over and think to mayself, what a cool boathouse! That’s all. I just think that simple thought. And sometimes, if I happen to have my camera, I stop and take a photo of it. But this time, a couple days ago, I hapened to be out for an early morning walk, with my camera, so shot it again.

I just love living in a place where I can get shots like this. A photographer once said an a podcast I was listening to  – I isten to a lot of photography podcasts – he said something like this, “Stop and take that photo you keep saying to yourself you’re going to take. Because one day, that barn you want to shoot just might fall down before you get to it.” Alas, that barn I wanted to shoot did fall down. It is on Highway 4 between Angels Camp (my home town) and Murphys. For years I kept telling myself I would shoot it, but I never did. And when my wife and I visited California a few weeks ago – we visit about every two years – that barn had collapsed. Sigh! Guess I learned my lesson. Well, at least I got the boathouse! 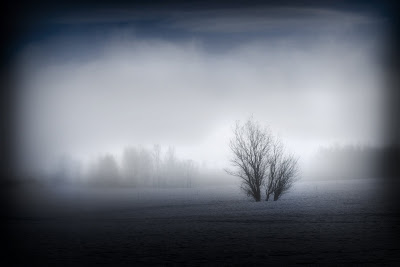 As I take a walk down the abandoned road toward Själand, about a twenty-minute slooow walk from our rented house in Haffsta, I spot this small group of trees huddling in the the snow covered field… waiting for spring. Exactly like I have been doing now for quite some time. My body is tired of the cold and I am longing for some warmer weather. I think everybody is feeling this way up here, even the trees. Spring is just around the corner, but sometimes it can seem like a long way off. Still, the spring will come, on time, as it always does!

I’ve been messing around with some photos of plants stuck in the snow. There’s nothing really unique about them, I guess, except that I must have looked like some freak out there in the middle of a half-blizzard, sinking down into the snow on my hands and knees, trying to get my camera at the lowest possible angle to get the look I wanted. 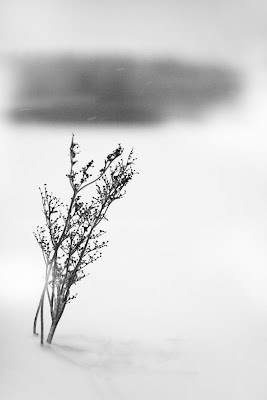 What motivated me to ‘stoop to that level’ anyhow? It was the way I had been feeling one day in early February. We had been living here in the north of Sweden for almost two months by that point.  The dark, short, winter days were wearing me out. We were not completely clear about where our future would find us. And quite frankly,  I was sick and tired of speaking Swedish 24-7.

I had been inside the house praying. As I went to the kitchen to get a glass of water, I looked out and saw how cold and blizzardy it had become. The thought occurred to me that I had been feeling like one of those small, dried up plants out there, stuck in the snow, feeling stuck in their situation. Then another thought occurred to me, that I was not alone, that God was with me, and that I would be okay, even if I didn’t feel it at that moment. 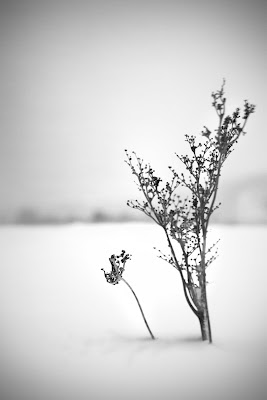 It just seemed like a God thing to trudge out in the storm on my skis and take some shots of those vulnerable little plants. So off I went. I found a good couple of plants for my shot, not too far from the house. They were all by themselves, completely alienated from other plants and trees. I stepped out of my skis, took off my gloves, and worked some angles with my camera. I set the best exposure I could with my limited light source, steadied my hands and arms and shot the images you see here.

By the time I was finished I thought my fingers might fall off. I thought to myself, “If only one person is encouraged by my photos, then the struggle I had been experiencing, the time spent speaking a second language and, of course, the frozen fingers from  photo shoot will all have been worth it.” 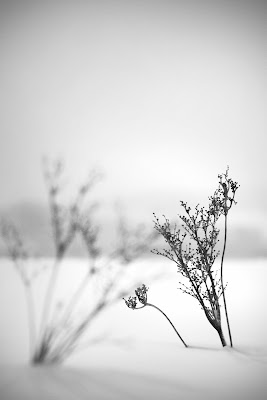 So, if you are feeling alone or stuck in an uncomfortable situation, take heart, because you are not alone. God is with you!

Deuteronomy 31:6
6 Be strong and courageous. Do not be afraid or terrified because of them, for the LORD your God goes with you; he will never leave you nor forsake you.”

The first Sunday we had moved to the north of Sweden, I was invited to shoot a baby dedication at a church in Billsta.. uhm, I mean, ‘the’ church in Billsta, coz there’s only one of em! Afterwards, I had some free time, so I stopped to take some photos of these two barns that stand at the entrance to the kingdom of Billsta. I got cold feet, literally, but they remained, standing guard of this tiny community, once a farming meka, I imagine. 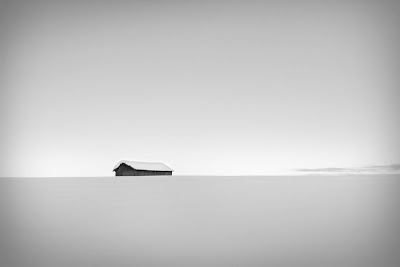 I was on a drive, one day, with a fellow photographer, and we stopped to take a photo of this barn lieing alone on top of a shallow hilltop, bearing the cold Swedish winter winds. I imagine if I were wandering about in the wilderness whilst trying to escape death by freezing, I might find this humble structure a piece of heaven. It’s amazing how a photo’s frame (I’m talking edges here, not an actual frame like you might buy at IKEA ) can tell a different story. Just to the left of this cabin is a cluster of homes, some new, some old, but not very compatible alongside this cabin. Imagine if I decided to push them into the frame? Hmmm. I think it would ruin the idea of aloneness and quiet I was trying to convey.