They say the king of Thailand is great. And I also think our Friends who arrived from the field are great! So here is a photo, proof that the are alive and well. If you want to see them in motion check out ourhttp://www.youtube.com/watch?v=V7Hv5b5lfXE&feature=youtube_gdata YouTube page.

I got up early – 7:30am HA!HA! – to walk on the beach and read a bit of scripture. It was only me out there. All the fishermen must have been asleep from a long night’s work. The boats were resting and I picked up a dead sand crab skeleton to show to Rasmus at breakfast. The mornings are pleasent and the rest of the day heats up like a steamy skillet, although it really isn’t that bad. We have the pool to cool off, so that’s okay. The first of our staff arrived in the middle of the night and one of them is sick with a stomach bug. But we’ll all be fine in a day I am sure.

We went for a walk last night. Just down the road about a kilometre. Spotted this van with Hello Kitty plastered on the side. Very fun! Families were all out grilling on the beach, listening to music and enjoying their Saturday. Just about every group we passed by greeted us with an energetic “Hello!”

It’s all about the squid. This is where they set them to dry in the sun (at least I think that’s what they’re for)

What began as a very long night (last night), of little boys suffering from jet lag and stomach bugs, turned out to be a relaxing evening (tonight) as Veronica and I read through a helpful book on how to debrief the people we will  be serving next week at the retreat here in Dolphin Bay, Thailand. Veronica’s favorite thing so far about our family vacation is the sun, the swimming and being with a bunch of cool M’s from different organisaitons who feel as if they are old friends. Hey! That’s more than one thing! Mine is simply that I get to eat Thai food. But I better back back off on the peppers. Enjoy more of today’s photos on our picasaweb profile.

Veronica, Rasmus and Lucas enjoy some fresh air outside our room after the “incident”.

Are you ever amazed at the amazing timing of a quiet moment coinciding with barf? This evening, just as we put the boys to bed and sat down outside to relax and enjoy the night breeze, Blwagh! Lucas threw up all over his bed sheets. Probably something he caught before we left Sweden. Except for this, we have been having a wonderful time. We eat Thai food for lunch, then Western food for dinner.The water and the air feel like nearly the same temperature, which makes it absolutely perfect to be here. There are a few other families and couples here at Juniper Tree.It is such a cool place, totally quiet on our street which sits just across te small road from the beach. Photos to come to our Picasa web albums soon!

Was it the minestrone soup, with the silver spoon, in the kitchen? Hmmm?

In less than 48 hours our family will be on a plane heading for Thailand. We are definitely ready for a change of pace and of weather. We have been going like ninety since almost two weeks trying to get all of our flights, passports and visas. Veronica brought down the boys’ swim clothes and sunscreen. I, of course, have a natural SPF of 40. Don’t you all wish you had as much hair as I do! And, there is  a stomach bug going around. I think V and I may have caught the tail end of it. Let’s pray it doesn’t stay long. Or… it could have simply been the soup I made today. Hmmm! Guess time will tell.

The temps have been -5 degrees celcius since Christmas.

This is our littlest boy Lucas.
He is a very cool child.
He makes us laugh and he doesn’t like to be told what and when to eat.
He really likes his brother Rasmus.
He sometimes hits him, too, which is hmmm, not so good?
He has good dance moves too. 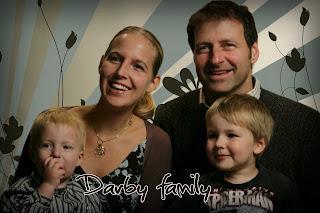 On March 1st our family is heading to Thailand for ministry, work and vacation.

We are raising money for our trip expenses and equipment for my photography project. If you would like to donate towards it, please visit our website to find out more: http://darbyfamily.ywamnetworks.com/thailand/donate/

To pray for us go to: http://darbyfamily.ywamnetworks.com/thailand/pray-for-us/

And yes, we have a new website! darbyfamily.ywamnetworks.com We invite you to visit it to read about what we do and our latest news, as well as enjoy photo albums and videos. Hope you enjoy it.

God bless you! See you when we get back.

Here is an article that the upcoming ywam.org website wrote about some work my media team did last summer.

written by Tamara Neely – “When I think about how uncomfortable I have often felt doing street evangelism, God reminds me that he gave me gifts and talents to bless the world with,” said Rob Darby. He and Lydia Calssen from YWAM Restenäs, Sweden wanted to bring a positive view to a city near their base whose reputation is ugly and boring, so they planned a photography exhibition.

“The amazing thing about this photo project,” said Rob, “was how God used our cameras as tools to open doors into the hearts of people whom we might never speak with otherwise.” They simply walked around the city and asked people if they could take their picture. One man they photographed had been wandering around the city in a desperate attempt to find peace from his depression and anxiety. When they understood this, the YWAMers stopped what they were doing and talked with him for a while. In the end he let them pray for him.

They also met a couple under a graffiti-covered tunnel. The YWAMers were not sure if they were Goths, Punks, Emos, or Satanists. Oddly enough, neither were they. Regardless, they talked together for over an hour.

Ultimately, the YWAMers displayed 16 large, framed photos and 30 smaller ones in a small café owned and operated by the local churches. The couple from the tunnel came to the exhibition, where they shared coffee and cake and continued their conversation.
Rob and Lydia have both tried to stay connected with the people they met. When they are in the city and see these people, they stop to say hello. Rob reported, “These remain some of the most real conversations I have had in a very long time. When I use my passion for photography, the world will be my oyster, and I will find valuable pearls in the people I meet.”

I searched around a bit and found a cool plugin for our website that allows us to have two languages. Perfect for a bi-lingual family like ours, eh? So now, if you are Swedish you can simply click on the Swedish flag and, if Veronica has had time to translate my articles, you can enjoy it all in the comfort of your own language. We do this because we love you 🙂 Let us know what you think by replying at the bottom of this post.